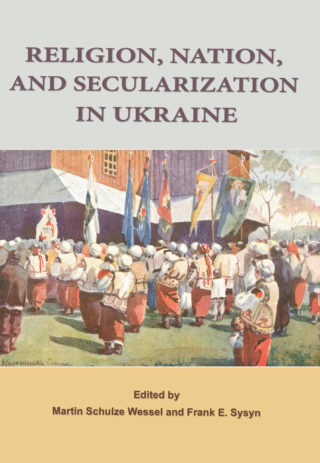 The book under review consists of nine essays that deal with religious issues within the Ukrainian historical context. The title of the book reflects the main focus of the authors: the connection between religious and national identities; and secular trends. The latter theme adds originality to this collection: few scholars in Ukraine undertake research from such a perspective—they are reluctant to adopt a secularization perspective because it was at the core of the Marxist approach.

Tobias Grill’s essay concerns secularization within the context of the activities of Reform rabbis. The author presents rabbis as agents of modernization in Jewish religion, education, philanthropy, and politics. Grill concludes that as soon as rabbis try to do something in the secular sphere or to import secular elements into their religion, they become agents of secularization. The same general picture, but with a different conclusion, can be found in Frank E. Sysyn’s essay, which describes the activity of the GreekCatholic bishop Mykhailo Zubryts’kyi. The reader can find mention of this cleric in another essay in the book, which indicates his importance for our understanding of the Ukrainian religious history of the late nineteenth and the beginning of the twentieth century. Sysyn shows that although Zubryts’kyi worked in various areas—the core of his thought and work was religion—he was motivated by the desire to make his flock into better Christians. Thus, the two aforementioned essays address the issue of understanding secularization—the first one shows a strong connection between secularization and modernization but the second essay leads to the conclusion that modernization can give rise to religiosity and religious influence on society.

This last point is evident in Leonid Heretz’s essay, which is based on an analysis of interviews. Here, the contradiction between religiosity and rational faith (“reasonable” religiosity) can be observed. The author shows how people perceive different religious issues, including “superstitions.” The term secularization in the title of Heretz’s essay seems to suggest that his essay should be included in the discourse represented by Grill’s essay. On the one hand, it could be said that the minimization of superstitions and a contemptuous attitude toward them indicate a rise in secularization. But, on the other hand, when these religious views (“superstitions”) are replaced with other views (“reasonable” religiosity), it would, rather, seem to indicate the transformation of religious consciousness, not its decrease.

Heretz’s essay presents other interesting findings. The author writes that in the interwar period, traditional piety coexisted with anticlericalism and a pragmatic view of the Church as the marker of the national identity of Carpathian youth; and the Communist orientation was the only way of expressing a split from religion (154-55).

The prominent theme of the other six essays in the book is the connection between religion and nation, and it is discussed from different perspectives. Liliana Hentosh concentrates on the formation of a modern Catholic outlook on the national question, that is, on nationalism and the building of new nation-states. It was Pope Benedict XV who elaborated on such issues. Although he emphasized the negative dimensions of nationalism, he, at the same time, suggested that every nation has the right to selfdetermination and state-building. This means that the Vatican supported the aspirations of nations of the Austro-Hungarian and Russian empires, including Ukrainians, to have independent states. This new doctrine made the Vatican’s diplomacy flexible, especially in the Eastern European context.

In Martha Bohachevsky-Chomiak’s essay, the author explores the relations between Greek-Catholic hierarchs and the Ukrainian community. She postulates that the Ukrainian Greek Catholic Church (UGCC) played a dual role—as government and opposition. The first role could be observed in its relations with the intelligentsia and the second in its relations with local authorities and the Vatican. From the essay, the reader can learn a great deal about the UGCC’s bishops of the first three decades of the twentieth century—for instance, Metropolitan Andrei Sheptyts’kyi experienced opposition in Ukraine as well as in the United States; also, Bishop Konstantyn Bohachevs’kyi had a conflict with the UGCC’s flock in the United States because he ignored the national aspects of community. Worthy of note is Bohachevsky-Chomiak’s use of the very interesting and controversial phrase “the secular Ukrainian Catholic intelligentsia” (135). This phrase consists of two seemingly opposite terms—secular and Catholic. If the intelligentsia was secular, why does she write that it was Catholic? The author might mean that part of the intelligentsia that was made up not of clerics but of lay people (thus secular). And when she uses the term Catholic, she might be referring not to the religious identity of that group but to its cultural background, which in Western Ukraine was based on Catholicism as well as on Orthodoxy. In any case, the phrase is not effectively used.

The cult of Josaphat Kuntsevych is explored in Kerstin S. Jobst’s essay. The author describes the life of Josaphat Kuntsevych, the origins of the veneration of him, and transnational and inter-denominational aspects of his life and legacy. The most interesting fact stemming from this research is that in the nineteenth century, the cult of Saint Josaphat had a nationalistic, antiOrthodox, and anti-Russian character but today, despite the rise of Ukrainian nationalism, which in Western Ukraine is combined with religious (Greek Catholic) elements, the cult of Saint Josaphat is not a dominant component of this nationalism (Jobst 10).

Burkhard Wöller’s essay presents various views on the Church Union of Brest. The author includes Polish and Ukrainian historiography on the topic. The main conclusion of the essay is that the position of scholars reflects the general mood of society or, at least, a part of society. This essay will be very useful for future scholars of the church union, not only because of its historiographic content but also because one can find in it more than twenty areas of inquiry for the pursuit of new research.

The reader will find a philological analysis of different texts of clerics and laymen in the essay by Michael Moser. The author concludes that the religious and secular writings of Greek Catholic priests and intelligentsia were much closer to the Modern Standard Ukrainian language than was imagined in the dominant narrative. One has to read this essay carefully in order to understand what this means—the author cites original texts and shows how they correspond with the modern language. The only thing that seems out of place is the author’s use of the International Linguistic System for the transliteration of personal names and bibliographic titles. In this essay, Ševčenko is used instead of the conventional Shevchenko, Kuliš instead of Kulish, and so on. Perhaps it would have been better to adhere to one standard throughout the whole book.

Oleh Pavlyshyn’s essay deals with the discussion surrounding calendar reform, mainly at the beginning of the twentieth century. It is explained how civil authorities and the UGCC’s bishops and flock regarded the New Style calendar through the prism of political, economic, and national issues. Here, the author presents views of Ukrainians in Ukraine as well as in the diaspora, although their positions were much alike. One of the main arguments against calendar reform, found by Pavlyshyn, is that the Old Style calendar has had a strong connection with the Ukrainian national identity.

I found this collection of essays very interesting, and I think that it will be useful for historians of Ukraine and the Church as well as for scholars of religion. All of the essays have been written on a high academic level. They introduce some new material into Ukrainian studies and provoke reflection on wider, interdisciplinary issues.