Fantasy and the Tarot 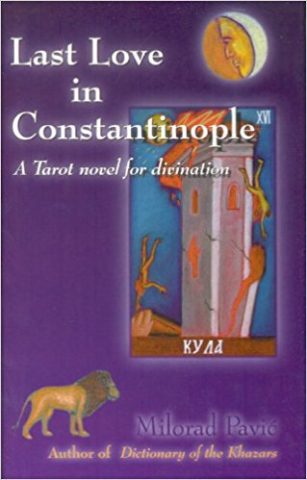 We know that Tarot had begun as a closed esoteric divination system. But, in the middle of XX century, the situation has started to change – from Tarot as an esoteric phenomenon to Tarot as a global phenomenon. In 1959, University Books began printing the Waite-Smith deck and Waite’s book “The Pictorial Key to Tarot”, making them more accessible to the public. Then in 1960 Eden Gray published her first book, “Tarot Revealed: A Modern Guide to Reading the Tarot Cards”. Gray’s book with its simple instructions became the template for future how-to-read-tarot books. Thanks to that Tarot became more available and understandable for an ordinary reader.Around the same time have appeared “Art Tarot” decks painted not only as a piece of art but as an addition to certain novels. Fantasy, magical realism and mystical novels contain new ideas about Tarot. Tarot as both an idea and a system gives fantasy writers new field to reflection and new methods to organize the novel. In that presentation, I will try to analyze the place Tarot as both of a symbolic and a divinatory system has taken in those novels and also I will consider new theories of Tarot.
If you have asked yourself that question, the answer is too many of them. This is just a short part of the list. But, as far as I can say, there are three main ways of usage Tarot in literature:

In the first case Tarot considered as both an organizing principle and a divinatory system. A classic example of usage Tarot that way is a post-modern novel “Last Love in Constantinople” written by Milorad Pavic. The novel is divided into three parts of 21 chapters, or “keys”, which are meant to parallel the 21 cards of the Tarot. The first chapter called “The Magician” is separated from other keys and it represents the main character – Lieutenant Sofronije Opujic. In this first chapter, a reader learns about the end of the novel which says that father of the main character – Harlamije Opujic – will disappear when he met his last love. He learns about that watching performance about his father’s death where he appears as a vampire. That prophesy come true in the end in the Third seven keys and reset us Second seven keys lay between keys of opening and keys of ending and show us the second, shadow level of perception of the novel. That is when the card is laid correctly he is a man but when the card lays upside-down he is a vampire. The same principle works with other characters. Thus we can see two different stories inside the one novel.Also, the book can be used as a divinatory instrument. Each chapter can, in many ways, stand on its own, which is important since it allows them to be read in any order. At the same time, each chapter takes on a different flavor depending on the order in which they are read. At the end of the book, Pavic gives three ways of divination with the book – The Magic Cross, The Great Triad, Celtic Cross – and thus offers the reader to become a co-creator of a story those cards can tell.

Organization of “Castle of crossed destinies” by Italo Calvino is similar to Pavic’s novel. The novel tells about a group of travelers who meet in a castle. Their powers of speech are magically taken from them and instead, they have only tarot cards with which to tell their stories. The first storyteller selects a card to represent himself, then lays down a double row of eight cards each to tell his tale. The next storyteller selects his court card and lays down another card. Listeners understand stories by the image of the cards and it is clear that the reader also can understand it his own way. Thus, as a result, we saw double columns crossed by three double series of cards. At the end of the novel, they found themselves in a tavern instead in the castle with popular Marseilles Tarot deck instead Bembo’s cards. The story repeats one again in the second novel. And again, we have a sort of multistory when the author invites the reader to collaborate.

“The Chronical of Amber” by Roger Zelazny

In the second case Tarot is just a part of a metaphorical background. The place of Tarot in the famous series “The Chronical of Amber” by Roger Zelazny is ambiguous. According to biographer Theodore Krulik, Zelazny became interested in the Tarot through his studies of the writings of Carl Jung. And from the one hand, cards mentioned as a magical artifact that can be used as a phone or as a sort of teleport. The deck includes ordinary Minor Arcana and Major Arcana that represents main characters. There are many theories about the question if we can compare characters with images of Arcana. But, in the one interview, Zelazny said that initially, he used the Tarot as “a good device for getting everyone described in a story”. Also, cards as metaphors appear on the journey’s way of the main character – Corwin. The Wheel of Fortune – seen in a dream and indicating a turning of events; The Tower is represented by the Lighthouse of Cabra, where Corwin first sees the results of his curse; the Hanged Man is portrayed in the form of a young man who has been hung upside-down and whom Corwin releases. And again, there are many theories about representing another Arcana but we cannot be sure about any of them.

The role of the Tarot in the famous Gustav Meyrink’s novel “The Golem” is much understandable. The novel centers on the life of Athanasius Pernath, a jeweler and art restorer who lives in the ghetto of Prague. In the book mentioned “tarok” games and connection between Tarot and Kabbala. When Pernath came into the closed room of the house which supposed to be Golem’s coverture, he saw the first card. The Magician that supposed to mean the beginning of some initiation or a spiritual path. When Pernath left the closed room he wearing The Magician suit and people treat him as a Golem. In the end, Pernath’s house became on fire and he falls out of the window in a classical pose of a Hanged Man. Appearing on that card we can understand as a sign of completing of his initiation. So in that novel Tarot used as a sort of a background that gives us more areas and ways of understandable.

In the third case Tarot considered as a magical artifact. That part of Tarot meaning uses with good effect in Charles Williams novel “The Great Trumps”. Author recall speculations about Tarot as an ancient system that contains all secrets of humanity. And tell the story about a man who looking for those secrets. He describes Tarot as magical cards possessed by some power. Also, there are statues that look like Tarot characters and represents them. The basic idea of that quest is to find the original desk that actually could open the gate to a rule the world. States that represent the Trumps in a constant state of dancing represents all powers and processes of existence. We can see all the statues dancing except The Jester is the center of the dance. The Jester here represents the God itself and those who are able to saw him dancing actually get the accept to world harmony. So Williams gives new interpretations of the sense of the Tarot and he doesn’t use allegoric possibilities of the cards as a symbolic system and organization possibilities of the cards as a divinatory system that distinguishes him from other authors.

So we can say that Tarot and fantasy expand possibilities of each other seeing as both literature and Tarot are a phenomenon that constantly creates and absorb new contexts, values, and senses.