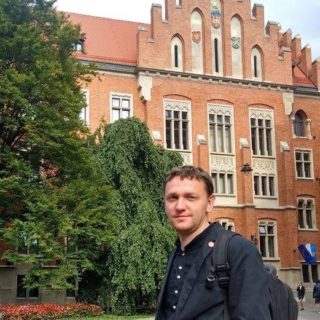 Vitalii Shchepansky Ph.D. in Religious Studies. He was born in Rivne (Ukraine). Received higher education during 2007-2015 at the National University “Ostroh Academy” in Ostroh (Ukraine). In June 2013, he had a short visit scholarship at Enskilda Högskolan Stockholm (University College Stockholm). In the winter of 2016, he has got his Ph.D. in Religious Studies. In the period from 2014 to 2015, he was honored with a President scholarship in Ukraine. From 2015 to 2018 he worked as a researcher and lecturer of philosophical and religious studies at the National University “Ostroh Academy”. In 2016 he became the winner of the Jerzy Giedroyc International Prize for the best Ph.D. dissertation. In the period 2018-2019, he did an internship at the Jagiellonian University, Krakow (Poland), as a scholarship holder of the international program “Studium Europy Wschodniej”, UW, Warsaw (Poland). Also in December 2018, he became a scholarship holder of the “Neo-Latin Scholarship on the Slavs” conference in Bratislava (Slovakia). Since July 2019, he has been working on creating a network of science museums in Ukraine. Author of the religious telegram channel “Chosen by spirits” promoting Religious Studies. Since 2020 he has been a member of the Workshop of Academic Religious Studies.