“THE SYNAGOGUE WAS DESTROYED, ONLY THE WALLS STAY PUT”, – ILLYA LUKOVENKO 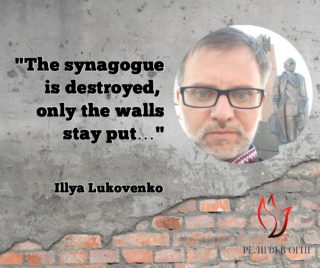 As of November 15, 2022, at least 10 synagogues have been destroyed in Ukraine as a result of the full-scale invasion of the Russian Federation. Three of them are located in Mariupol. We have talked about the Jewish religious buildings in the city, about Mariupol Jewish community and the life under the occupation with Illya Lukovenko, PhD in History, Associate Professor of the Department of Social Sciences of the National Music Academy of Ukraine named after P. Tchaikovsky.

– Let’s start the conversation about the time “before the war”. Please tell us what life was like for the Jewish community in Mariupol until February 24, 2022.

– I have lived in Mariupol for the past 6 years and had the opportunity to observe the community activities and be a part of this process. The Jewish community was quite active. At least 300 people were members of the community. It should be noted here that the Orthodox community includes only Halachic Jews, meaning the ones who have a Jewish mother. It is clear that there were also many “non-halachic” Jews. In Mariupol, there was Hesed, a charity foundation, helping all elderly Jews and their family members. On holidays, many people came to Habad Lubavitch synagogue, dozens, more than a hundred to be exact. Of course, significantly fewer people came for daily prayers and Shabbat, but there were always several dozen people on Shabbat. And a minyan (10 adult men) steadily gathered for daily prayers. In general, Mariupol had all the necessary structure of traditional Jewish life.

The chief rabbi of Mariupol, Menachem Mendel Cohen, came to the city in 2005. He and his wife Esther established the entire infrastructure. An educational system was created that included all ages: for seniors there were Kolel Torah courses for both men and women; STARS was a program for young adults; Smart J was a school for children, in addition to Ukrainian school, and a kindergarten for the youngest. The community also had a mikvah (ritual bath), kosher products were shipped, and a Jewish sector was functioning at the local cemetery. There was everything needed in order to live a full Jewish religious life in Mariupol…

– Rabbi Menachem Mendel Cohen was not in Mariupol on February 24, he had to go to Israel a bit earlier for personal reasons. But people started leaving immediately. Someone who had the opportunity left on their own, but the majority began to evacuate later. The organization Christians for Israel also joined in effort of taking people to Israel. I can say that as soon as the opportunity arose, the community organized evacuation to the territories controlled by Ukraine for those who wanted and were able to do it. People were taken to Berdyansk, then to Zaporizhzhia. For repatriation, people went through Vinnytsia and Chisinau. But, to be honest, there were different situations in different periods. Some people left on their own, some were evacuated. Many people are in Israel or Europe now. A large part of the community is in Ukraine. A small part remained in Mariupol: some simply did not want to go, some did not trust the people who wanted to take them away. There were people whom the “Russians” took to Russia. And already there, these people contacted Jewish communities in order to send them further to Israel or Ukraine, some stayed with relatives there.

– Are prayers conducted in Mariupol now? Is there any Jewish communal activity?

– No, in terms of some activity ─ no, because there is no possibility. But the community continues to care for those who remain there, despite the fact that this involves great difficulties. The humanitarian aid and foodstuffs were delivered to those who remained for a while. There is a connection with them, but, of course, it is very difficult. In fact, there is no Jewish life in occupied Mariupol now.

– As part of Religion in Fire project, we document the damage and destruction of religious buildings in Ukraine. Can you tell how many synagogues there were in Mariupol, and which of them were active?

The first prayer house fell into disrepair even before the start of this war. It is located on Georgiivska Street next to the Museum of Regional Ethnography. There were only walls left, and in recent years this space has been used for artistic and cultural events. The last event was in the fall of 2021, dedicated to 80 years of Holocaust in Mariupol. Literally on the eve of the war, the question of its restoration was considered.

The second prayer house, in which the Habad community prayed before the revolution, is located on Mitropolitska Street. In Soviet times (during the period of occupation and until the beginning of the 1960s), it was used as a church, and then as a gym. Nor was it used as a synagogue in modern times. Unfortunately, I do not know what condition it is in now. I know that the residents living nearby had the opportunity to use it as a bomb shelter.

The third prayer house was on the corner of Mykolaivska and Kharlampiyivska streets. Two-story building, old, early 20th century. This is the so-called “artisan” synagogue or it was also called “artisan prayer house”. Since the mid-90s, the house of worship of the Seventh-day Adventists has been located there. This building was damaged during the Russian-Ukrainian war in the spring of 2022. A shell flew into the corner of the building and partially destroyed it.

The premises of the chorale synagogue have not survived, it was destroyed during the World War II, and now another building stands in its place.

Next to it was a utility room – a small one-story building, which in Soviet times was used as an evening school. And it was this wing that was handed over to the Jewish community in the 90’s. Until the fall of 2020, the synagogue was located in this building and the Jewish community functioned there. This building was small, on Kharlampiivska Street. Now it is also completely destroyed due to hostilities. Only the walls remained there. It was located in the depth of the yard, and the building that was in front of it (before the revolution it was a school for poor Jewish girls) and closed it from the street, was destroyed to the foundation.

In July 2020, the synagogue was attacked. A man came with an ax and attacked the guard, wounding him. A rabbi was also in the synagogue at the time, but he was miraculously unharmed. Later, the police found out the identity of the perpetrator, who turned out to be a certain Caesar Yuliy-Galaryrogailalirozr Illich (sic!).

In Hasidism, and especially in Lubavitch Hasidism, there is an idea that nothing is accidental, any challenges are given in order to grow spiritually, to move to a new, higher level. And after this attack, the rabbi decided that it had been a sign that it was necessary to develop, expand the community and change the location of the synagogue. In the end, the community moved to a new building larger in size.

It was a building in the very center of the city on Miru Avenue, there the synagogue functioned until February 2022. This is an old building, pre-revolutionary, early 20th century. Before it became a synagogue, Mariupol Puppet Theater was located there. There was a large hall in the premises, which was used as a prayer hall. This synagogue was also destroyed, only the walls stay put. It was a two-story building, and now there are no floors or a roof… It is good that the Torah scrolls were evacuated. But this is a separate story!

– Do you think the community will restore after the victory of Ukraine? What will happen to the Jewish community of Mariupol in the future?

– It is difficult to say what will happen next. Everything depends on how events develop when the city is liberated. Will people come back? I know that many people want to return, but not everyone has the opportunity to do so: there is simply nowhere to return, people have lost their homes. It is obvious that some people will be in Mariupol, some will return. And how the community will continue to function, probably no one can predict…

The interview was conducted as part of the project Religion on Fire: Documenting Russia’s War Crimes against Religious Communities in Ukraine, implemented by the NGO Workshop of Academic Study of Religions.